Webster Hill Students Learn Something Not Every Elementary Student is Expected to Know: Financial Literacy

Insights  <  Webster Hill Students Learn Something Not Every Elementary Student is Expected to Know: Financial Literacy

This article was originally posted on we-ha.com

For the tenth consecutive year volunteers with Junior Achievement Program taught about 300 students at Webster Hill Elementary School in West Hartford the importance of financial literacy and work readiness. 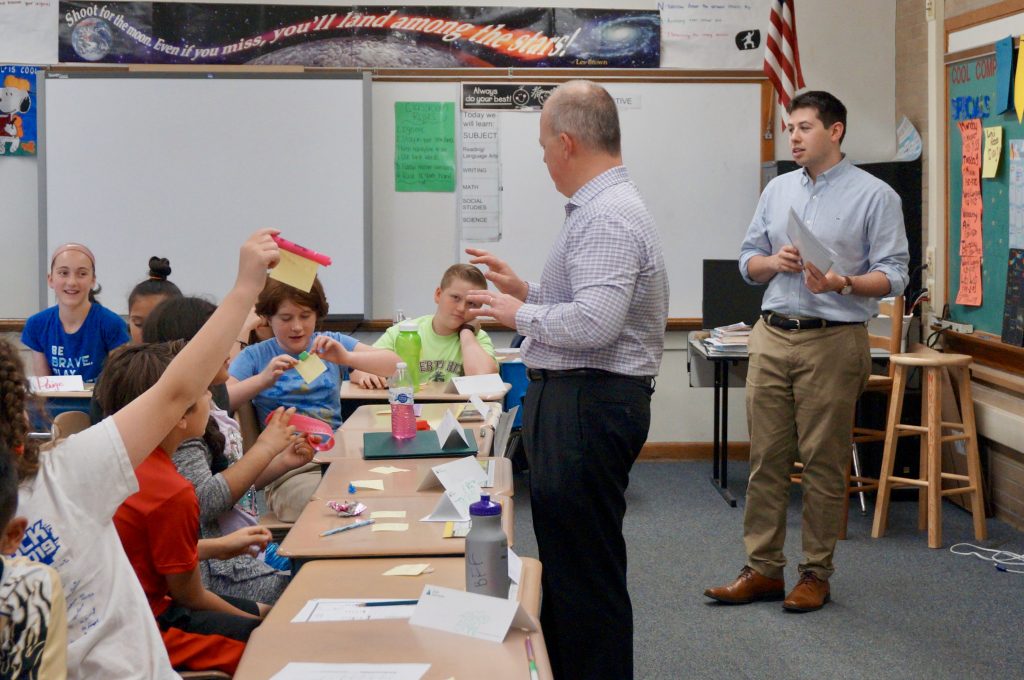 blumshapiro volunteers Brian Berry (left) and Jared Kotler teach Deb Kotler’s fifth-graders about supply and demand, with a fun lesson involving pricing the items they have on their desks. Photo credit: Ronni Newton

With a focus on entrepreneurship, work readiness, and becoming financially literate, volunteers worked with the students in grades 2-5, engaging them in age-appropriate conversation to explain concepts that not every elementary school student has heard.

The Webster Hill sessions, part of Junior Achievement’s “JA in a Day” Elementary School Program, are made possible by two dozen volunteers from West Hartford-based blumshapiro. Fox 61 has also supported the Junior Achievement program at Webster Hill, and this year anchor/reporter Jennifer Bernstein was in the classroom.

“I think it’s really important that the children begin to understand about credit cards versus cash, or debit cards versus cash. Because what they see is their parents just using the card. They’re not looking at the cash being exchanged,” said Therese Horn who teaches third grade at Webster Hill.

Horn’s students were working in booklets, answering questions and learning vocabulary as the volunteers from blumshapiro explained concepts such as buying and selling, producing versus consuming, paying taxes, and what it means to be an entrepreneur.

“This, I feel, is really appropriate for them,” Horn said. “Junior Achievement is doing a great job.”

Working with Horn’s students was Andrew Lattimer, a managing partner at blumshapiro and a veteran volunteer.

Lattimer explained that the program puts a large emphasis on becoming familiar with vocabulary and understanding concepts, especially when talking to students who are only in third grade.

“I would say 95 percent of the stuff, they come away and they understand it,” said Lattimer, whose own children went through the Junior Achievement program.

In the classroom, the students were excited and engaged with the volunteers using concepts such as what  a “good” versus a “service” is to explain different businesses they know or their parents work for.

As the students snacked on veggie straws and goldfish, they were becoming more financially literate than some students far older than they are.

Down the hall in a fifth grade classroom, the students were using more concrete numbers and figures to learn about supply and demand, as well as the value of creativity and innovation.

Brian Berry, a blumshapiro volunteer who has been involved in the program for 12 years, explained how the context of family life and technology is incorporated into the lessons they use so students can see how these terms affect their lives every day.

Fifth-grader Kate Riker spoke from a student’s point of view, explaining that the program is not only a good way to learn concepts but also a fun break from the normal school-day routine.

“I feel more prepared because if I wanted to invest in something or make a business, I know how to make a profit and how to buy stuff,” said Kate. “It’s really fun.”

Having a new face come into the classroom to teach students about something they’re unfamiliar with has an interesting way of benefiting students, volunteers, and teachers alike, according to both Sumayya Ayoub, a senior executive manager with Junior Achievement, and Webster Hill Principal Jeffrey Wallowitz.

“I know for a fact students retain it because there’s another adult in the classroom,” said Ayoub, who was popping into classrooms overseeing the program.

At the same time students are being exposed to new concepts, volunteers are also navigating a sometimes unfamiliar territory: learning to work with kids.

Wallowitz explained that having a new figure come into the classroom to teach gives teachers themselves a new perspective on their kids and how they respond to different people.

Wallowitz, who has been at the school all 10 years Junior Achievement has done JA in a Day program, noted that as the years go on the volunteers become more comfortable with the kids and material, allowing the students a new kind of exposure to real-life careers.

“You know, when you grow up, you have a limited view of what’s out there. But when you bring in people who work in the field, and they talk about that you open up a whole perspective of a child’s future and what they could do,” said Wallowitz. “We have kids with all kinds of strengths and when they hear [about it they think], oh, that’s something I can do.”

In addition to the program at Webster Hill, Junior Achievement held a career walk this spring for students from Conard and Hall high schools, and FLOW – the Future Leaders of West Hartford – volunteered at Wolcott Elementary School.

Thus far the program has been limited to just a few schools in town. “But it shouldn’t be,” Wallowitz said.

Lattimer echoed this sentiment saying: “I think every school should do this.”